S and I met some of our closest friends by starting a book club six years ago. I know, this sounds like something too refined or high brow for us. But guess what — we’ll take almost any excuse to get together with girlfriends, drink wine and eat cupcakes.

If you know me, reading anything longer than a gossip magazine has always been a chore. So we started our club with a very specific theme – books that have been turned into movies. It then spread into memoirs by funny women. Since then, our book club has become more of a “let’s get together and watch The Bachelor,” or “let’s meet for breakfast before work” club, and we’ve abandoned books all together.

But since I’m aging more toward 40 and further away from 20 – it’s about time I exercise my mind and reintroduce reading to my after-work hobbies. Starting this April I’ll be recommending monthly reads, based on a theme, for anyone else who wants to start or restart a book club. Don’t worry, I plan to focus on easy, entertaining reads under 350 pages.

Stay tuned for April’s suggestions coming in the next few weeks. I’ll give you a hint – one of the books may be based on a movie I recently saw and fell in love with… 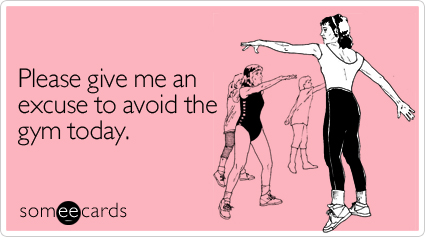 Let’s be honest, no one really likes working out. It is called “working” for a reason. It’s not fun. Plain and simple. However, to try and make it more fun a few of us got memberships at the same gym. But here’s the thing. As struggling 20-somethings, we aren’t rolling in the dough quite yet. So we’ve opted for one of the cheapest gyms out there (which will remain nameless to protect the privacy of the people listed below).

Recently we took a class with an instructor none of us had ever heard of before. WARNING: NEVER DO THIS. Ten minutes into the class we all regretted being there. It was a circus. So I decided to create a cast list of the people we encountered during our workout class in the twilight zone.

“Mr. Love Muscle” Our instructor was a 50-year-old Richard Simmons wannabe. Not only did he make uncomfortable gestures and references throughout the hour long class, but he told us the story TWICE about “working his love muscle.” I’ll leave it at that.

“Armpit Hair Woman” Front and center was an interesting woman wearing a wife beater with longer armpit hair than Hulk Hogan. Thank god we stayed far away from her. I’m sure that would have been an interesting smell.

“Butt Crack Man” Right in front of us was a man well into his 60s who couldn’t control his BO. Not only did he smell bad, but his butt crack played peekaboo as Mr. Love Muscle made us do squats repeatedly throughout the class. Not cute.

Moral of the story, scout out your instructors and class attendees before committing to an hour with these people. If you’re not careful, you will be scarred for life. Have you encountered interesting characters at the gym? If so, please share! We’d love to hear that we aren’t the only people who judge others while working out…